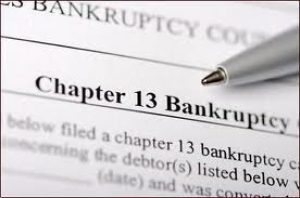 Chapter 13 is sometimes known as the “wage earner” or repayment plan bankruptcy. You can think of Chapter 13 as a debt consolidation, where all debts are grouped together, and re-paid to creditors over a three to five year payment plan, supervised by the Chapter 13 trustee and the Bankruptcy Court. The main advantage of Chapter 13 is that you are allowed to keep non-exempt property. In Chapter 13, however, you are not completely discharging unsecured debt. For the privilege of keeping non-exempt assets you must re-pay creditors a percentage on the dollar over the life of the plan. How much you need to re-pay is based on the value of your assets and your ability to pay, and varies from case to case.

The Chapter 13 trustee acts as a disbursing agent by collecting your installment payments and distributing them to creditors according to the plan; but the trustee also represents the interest of the creditors, and is responsible for ensuring continued compliance with the plan during the re-payment period.

All creditors may not be fully paid in Chapter 13. Unsecured creditors, in many cases, are paid only a small percentage on the dollar, and upon successful completion of the plan the remainder of the debt is discharged similar to Chapter 7. Debtors can make payments to the trustee themselves on a monthly basis, or for convenience, the payments can be deducted directly from wages via a wage assignment, which is similar to a garnishment, where your employer deducts and sends a portion of your wages to the Chapter 13 trustee each pay period.

Chapter 13 has other advantages aside from allowing people to retain non-exempt property. For instance, Chapter 13 is commonly used to save a home from foreclosure. Delinquent mortgage payments, back property taxes or missed car payments can be paid through the plan to stop foreclosure or repossession. Finally, Chapter 13 may be the only option under the new laws for those whose earnings are above the median income.